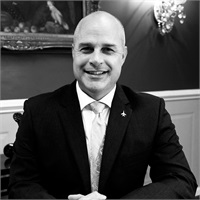 John “Buster” Wilcox grew up in Olathe, Kansas to Montana natives Bill and Wilma Wilcox. He pursued his dream of flying by attending the United States Air Force Academy where he earned a Bachelor of Science in history. After completing pilot training John flew F-16s in the Air Force and Air National Guard, participating in combat operations in Yugoslavia, Iraq and Afghanistan. He retired after 25 years in 2020. Buster is Series 7, 63 and 24 licensed and has worked in the financial services industry for five years. John is passionate about working with clients and helping them achieve their financial goals.

In his free time John enjoys flying, spending time with his wife, Colleen, and being a father to his three children, John, Jr., Genevieve, and Violet.

In his free time John enjoys flying F-16s, spending time with his wife, Colleen, and being a father to his three children, John Wilcox Jr., Genevieve, and Violet.